Through the Department of Migration Management, IOM works on the development of policy guidance for the field; the formulation of global strategies; standard-setting and quality control; and knowledge management relating to “mainstream” migration sectors, including labour and facilitated migration, migration and development, counter-trafficking, assisted voluntary return, migration health, assistance for vulnerable migrants, immigration and border management and overall capacity-building in migration management.

In addition, the Department also manages the IOM Development Fund and is responsible for reviewing, endorsing and managing multiregional and global projects. The Department provides technical supervision of project review and endorsement to experts in the field. It is also responsible for maintaining operational partnerships with relevant governmental, multilateral and private sector industry partners in coordination with the Department of International Cooperation and Partnerships. IOM has had a presence in Bosnia and Herzegovina since 1992.

Migration Management in Bosnia and Herzegovina

In the context of the increased the number of irregular migrants transiting through the country since the end of 2017, and of persons seeking asylum, IOM seeks to support the Government of Bosnia and Herzegovina (BiH) to effectively manage a functioning reception system that is in line with international standards and that provides living conditions at an acceptable standard, where the dignity of those accommodated is maintained and their basic needs met.

To respond to the increase in mixed migration flows, IOM and its partners through a coordination mechanism the Coordination Group for the Refugee and Migrant situation in Bosnia and Herzegovina, provides humanitarian assistances to migrants.  Through different periods IOM managed up to seven reception centres, in Sarajevo Canton (SC) and Una-Sana Canton (USC), providing accommodation to more than 8,000 people at a time. At the moment, there are 5 remaining TRCs in the country.

The composition of the migration flows is mixed, with top declared countries of origin being Pakistan, Afghanistan, Bangladesh, Iraq, Iran and Syria. While the vast majority is single men, there are also families with children, elderly, unaccompanied migrant children, and other vulnerable categories.

On behalf of the United Nations Country Team (UNCT), IOM and UNHCR co-lead the migration response in support of the BiH authorities and in particular the BiH Ministry of Security. This support covers both the provision of humanitarian assistance and the strengthening of the overall migration and asylum management in the country.

At the state-level, the Operational Headquarters for Migration Issues chaired by the Minister of Security prepares and proposes measures, decisions and procedures for action for the Council of Ministers and other institutions and agencies and coordinates the response of all state actors involved in both the humanitarian and migration and asylum management response to the current situation. Representatives of the entity-level and the Brčko District of BiH bodies for migration issues are participating in this forum. Una Sana Canton representatives are not members but are invited to participate in this body.

Since 2018, IOM as the principal Agency of the response, participates in this body at the request of the BiH Minister of Security. The body meets in on a bi-weekly basis, however recently, it has met less frequently.

IOM and UNHCR co-chair monthly Refugee and Migrant Response Coordination Meetings: this interagency group is open to all national and international governmental and non-governmental actors in the humanitarian response to the migrant and refugee situation and is the main venue for information exchange and coordination among international and civil society stakeholders.  State level authorities are routinely invited, as are Federation authorities as well as those from Sarajevo Canton and municipality.

IOM - the UN Migration Agency has been present in BiH 1992.  IOM has a longstanding partnership with the Government of BiH supporting the country in key migration management areas, including but not limited to counter smuggling of migrants and trafficking in human beings, border management, labour migration, and diaspora engagement.

In response to the increase in migrants and asylum seekers in BiH since the end of 2017, IOM has scaled up its field presence in Una Sana Canton significantly, first through the deployment of mobile protection and assistance teams, and in 2018, the first UN agency to open a field office in Bihac in Una Sana Canton.

IOM outreach teams in coordination with Red Cross provide assistance to those sleeping outside in informal and rough accommodation, by distributing food and NFI packages, personal protective equipment and information on assisted voluntary return and reintegration (AVRR).

Emergency Tent Camp in Una-Sana Canton, officially opened on April 21, 2020 to accommodate up to 1,000 single men sleeping rough at that time, as a preventive response to COVID-19 pandemic. The camp was closed on 23 December 2020, and is currently being reconstructed as a container facility. Army tents under the supervision of the Service for Foreigner’s Affairs (SFA) are serving as temporary solution for up to 900 people in the vicinity of Lipa, where IOM provides technical assistance to SFA.

Since mid-2018, through the support among others of the Directorate-General for Neighbourhood and Enlargement Negotiations (DG NEAR), the Directorate-General for European Civil Protection and Humanitarian Aid Operations (DG ECHO), the Council of Europe Development Bank (CEB), the United States Agency of International Development (USAID), and the German Federal Civil Protection Agency, significant efforts have been directed to support the Government of BiH to expand the country’s capacity to provide accommodation, humanitarian assistance and protection to migrants, asylum seekers.

IOM provides support to the Border Police and the Service for Foreigners’ Affairs to further strengthen their human and technical capacity to register irregular migrants, and to proactively screen and identify those vulnerable to violence, exploitation and abuse. IOM is also supporting the Service for Foreigners’ Affairs in Centre Coordination and Centre Management (CCCM), coordinating all activities and all actors/implementing partners providing services in the centres. This also includes working closely with UNHCR, UNICEF, UNFPA and DRC to mainstream protection in the migration response, while working to identify and address protection concerns in the centres, with particular attention given to gender-based violence, and trafficking in human beings.

IOM, together with partner agencies, has established structures and mechanisms to promote migrants’ participation in the daily life and operations of the centres, and established migrant/community structures and community representatives/leaders facilitating dialogues between migrant groups, and between migrants and centre management, and for migrants to be able to express concerns and emerging needs.

There are also reporting mechanisms established for migrants to report incidents of violence, exploitation or abuse, and other protection concerns, anonymously in their own language.

Vaccinated 58 People on the Move in Reception Centre Ušivak 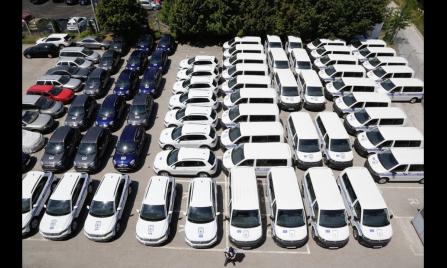