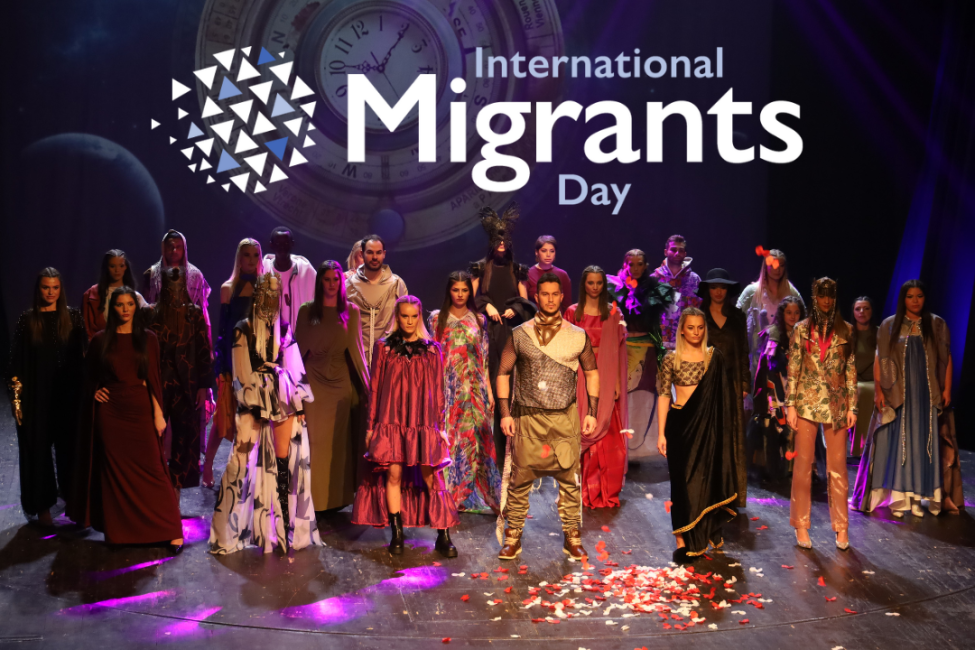 On the occasion of International Migrants Day, the International Organization for Migration (IOM), with the support of the European Union, the governments of Italy, Czechia, Norway and Denmark, Qatar Charity and corporate sponsors, organized No Nation Fashion x Jase King artistic performance and panel discussion on the topic "The economic potential of migrants". The event was held in the National Theatre of Republika Srpska in Banja Luka.

International Migrants Day was established by the UN General Assembly and is marked on December 18 every year. On that day in 1990, the International Convention on the Protection of the Rights of All Migrant Workers and Members of Their Families was adopted. The focus of this year's commemoration of International Migrants Day is to point out the significant contribution of migrants to the economies of their countries and to the countries to which they migrate, as well as the promotion of cultural exchange and understanding, the promotion of social inclusion and the celebration of creativity and different skills of migrants.

On this occasion, Laura Lungarotti, Western Balkans Coordinator and IOM Chief of Mission in BiH pointed out: “As Bosnia and Herzegovina is also facing increasingly labor shortages in some key sectors of the economy, we wanted to use some reflection time today to see what best practices are to be encouraged in the country to transform the challenges of migration into economic opportunities”.

They agreed that migration is not a crisis of the modern era, but a global phenomenon that has existed since the beginning of mankind and that it should be seen as a source of prosperity, innovation, and sustainable development. This is validated by various studies that talk about the positive impact of migrants on the labour market, on public finances and the economic growth of host countries.

On their journey, migrants bring their knowledge, skills, and cultural heritage, representing the potential and opportunities for creating more resilient and inclusive communities and shaping the global social and economic environment. This was demonstrated by the artistic performance presented as part of this year's event. Namely, No Nation Fashion x Jase King, and artists from Banja Luka, presented a unique three act performance where clothing items, created and made by migrants, were shown. The presented collection depicts people's development and path on the move from their departure from their homes and transit to their final destination, which is reflected in social and cultural integration.
Jean-Baptiste Andreani stated, “Fashion must take its place as a universal language unifying our beliefs.

Through our various projects, most recently in collaboration with the IOM Office in Bosnia and Herzegovina, we want to champion the values of diversity and inclusivity. Creativity transcends borders. We can all learn from our differences.”

Participant in the panel discussion, Jovana Tulumović, director of Mesna industrija Tulumović, pointed out: "We solved today's business challenges related to the lack of labor by hiring migrants, which helped us to carry out our business processes smoothly, and successfully overcome the challenges."

The well-attended event showcased the contribution of a group of talented individuals who came from different parts of the world and shared their knowledge, skills, and culture to create something meaningful and valuable.