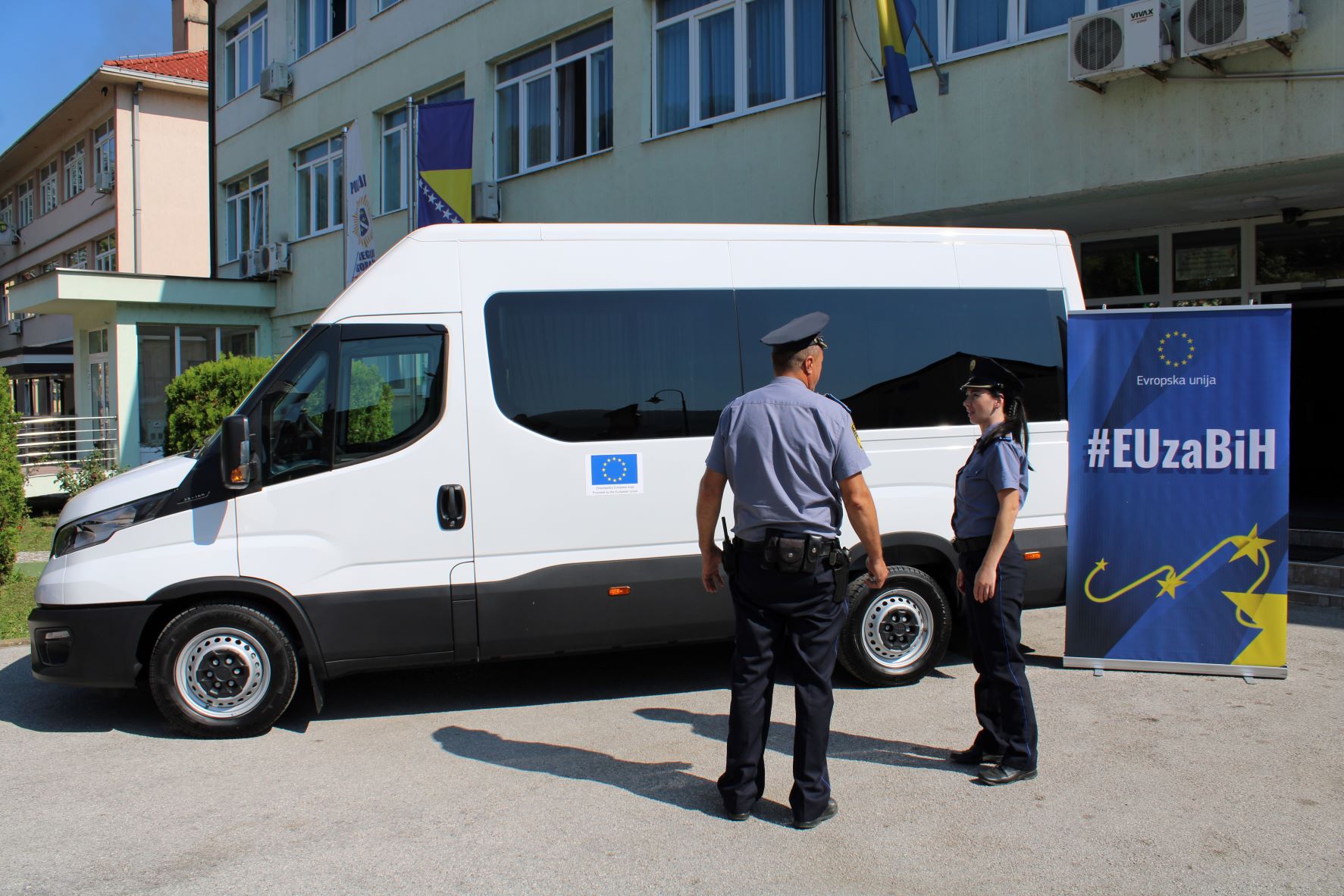 (Sarajevo, 07 September 2022) The European Union donated today one minivan worth 79,900 BAM to the Ministry of Interior of Bosnian-Podrinje Canton Goražde.

The donation is part of the EU’s continuous support to police agencies in BiH in their day-to-day operations in the field. The van will enable greater capacities for transporting people and greater mobility of police officers in the field, both in the Canton and, if necessary, throughout BiH. A vehicle with a capacity of 9 seats with additional protective equipment will be at the disposal of the MoI and will significantly contribute to efficiency in the field. In cooperation with the Service for Foreigners’ Affairs (SFA), IOM and local agencies provide support to migrants with transportation to the official accommodation facilities.

In the past three months, the Border Police of BiH, the Directorate for the Coordination of Police Bodies (DKPB) and the Ministry of Interior of the West-Herzegovina Canton have received equipment, with a total value of more than 240,000 KM, which will be deployed in the field. So far in 2022, the European Union has handed over two off-road vehicles to the MUP of the Una-Sana Canton, one off-road vehicle to the MUP of the Bosnian-Podrinje Canton Goražde and the van donated today, to the same institution.

Thanks to the EU assistance, temporary reception centres in BiH have been established and their running supported, including most recently Temporary Reception Centre Lipa for accommodation of migrants, refugees and asylum seekers. The Project has also supported the provision of food and water, sanitation, clothing and psychological counselling services, as well as access to education and health services for migrants residing in BiH. The European Union donated funds are also used to purchase equipment and provide expert assistance to the Ministry of Security, Service for Foreigners’ Affairs, Border Police and the Sector for Asylum of BiH, State Investigation Agency and protection (SIPA), the Ministry of Interior of Una-Sana Canton, West Herzegovina Canton, and other institutions and agencies.

The project “EU Support to Migration and Border Management in Bosnia and Herzegovina” is funded by the European Union through Instrument for Pre-Accession Assistance (IPA) and is implemented by the IOM in partnership with UNHCR, UNICEF, UNFPA and the Danish Refugee Council (DRC).