Twenty-six years after the war in Bosnia and Herzegovina, the country remains divided. Increasing political instability continues to undermine reconciliation and prospects for a common vision for the country. Furthermore, the lack of progress and socio-economic opportunities has contributed to the departure of tens of thousands of young people from Bosnia and Herzegovina, despite their potential to build a more inclusive and peaceful society.

Since 2018, IOM’s Bosnia and Herzegovina Resilience Initiative (BHRI) empowers local youth to become agents of change. First and foremost, BHRI provides youth with spaces to meet, interact, and collaborate towards common goals regardless of their background. BHRI also offers opportunities for youth to increase their role in local decision-making processes, while promoting political accountability. Finally, BHRI explores history, arts and culture as tools to bridge division and engages youth in local media and messaging campaigns to amplify positive voices and unifying narratives.

BHRI is part of IOM’s social cohesion and resilience portfolio. It was funded by the United States Agency for International Development’s (USAID) Office of Transition Initiatives (OTI) for four years and is currently funded by the Austrian Development Agency (ADA). It is implemented through an iterative small-grants mechanism, which supports contextualized and adaptable programming and layering of grant activities for complementary. Based on BHRI’s best practices and lessons learned, IOM is currently raising funds to continue with its most impactful activities.

“I love spending time here. I noticed that we have become more open to socializing and getting to know new people. We discovered that we can be friends, while before we would avoid each other” (female, 15-18 years)

To provide youth with space to interact and collaborate with their peers from different backgrounds, BHRI established or strengthened 37 youth clubs and centres across the country. BHRI trained more than 550 active youth to manage these youth spaces and organize activities for their peers, such as informal education or social events. To date, nearly 3,000 youth have participated in these activities. Many youth spaces have been formally registered by municipal governments, who have either provided them with premises or a small budget to continue their activities.
Youth clubs and centres are also used as a platform for social change. With BHRI support, youth have designed and implemented more than 300 local initiatives in 67 communities based on locally defined issues and priorities. This includes for example various clean-up actions and refurbishment of small-scale community infrastructures. To interaction between youth from different communities, BHRI organizes exchange visits between youth spaces. BHRI is also supporting the establishment of a network of youth spaces in the Federation of BiH to mirror the formally established network of youth centres in Republika Srpska to promote collaboration and standards of work.
Advocacy on youth issues is promoted through BHRI’s support to youth councils at the municipal, cantonal, and entity levels. BHRI established formal cooperation between the three entity-level youth councils who are, among others, jointly advocating for the revitalization of the national-level commission for youth. The three entity-level youth councils also signed a memorandum of understanding with the national-level youth councils of Serbia, Montenegro and North Macedonia for increased sub-regional cooperation. Through its support for the development of a youth policy for Republika Srpska, BHRI also successfully advocated for the recognition of youth work as a profession in Republika Srpska and development of an academic curriculum on youth work at the University of Banja Luka. Finally, BHRI supported the development of a youth policy for Republika Srpska and West Herzegovina Canton.

“It is quite clear that we young politicians have different rhetoric than the older ones. We have noticed that the same issues affect youth across the country, regardless of the entity they live in. We see the value in collaboration and are ready to work together” (female, 19-24 years)

In the run-up to the 2020 local elections, BHRI organized various citizen forums in Mostar during which the population reflected on priority issues to be addressed following the first local elections that took place in the city in 12 years. BHRI subsequently organized candidate forums in Mostar as well as 15 other communities across the country, establishing direct communication between citizens and political candidates. Livestreams of the forums resulted in some 11,000 people engaging online per event. After the local elections took place, BHRI organized five accountability forums with the newly elected Sarajevo Canton government to answer questions about their first 100 days in office. In total, these forums were viewed more than 200,000 times. Finally, BHRI organized five citizen and 20 candidate forums in the run up to the relatively unknown local neighbourhood council elections (MZs), while encouraging citizens and youth to become candidates. These activities contributed to improved political accountability.

To strengthen the role of youth in local decision-making processes, BHRI organized three political academies with a total of 63 politically active youth across the country and political spectrum. They received training on political responsibility, accountability, and campaigning with the overall goal to raise a new generation of politicians who pursue a positive vision for the country. Sixteen youth that participated in these academies got elected to their local government. Most recently, BHRI supported a fourth political academy with elected youth as well as local youth activists to encourage collaboration through local initiatives. Regular dialogue between local officials and youth on issues that are relevant for youth were promoted through various events organized at BHRI-supported youth clubs and centres.
To increase voter turnout, especially among youth, BHRI supported online information and awareness raising campaigns and offline get-out-to-vote actions. In the run up to the 2020 local elections, more than 300 youth were involved in street actions during which they distributed flyers, provided instructions to youth voting for the first time, and explained how their vote can make a difference. They also encouraged citizens to resist inflammatory rhetoric and hate speech and base their vote on issues that matter to them instead. The online campaigns produced more than 1,500 social media posts with a total reach of more than 10 million and engagement of nearly 250,000. 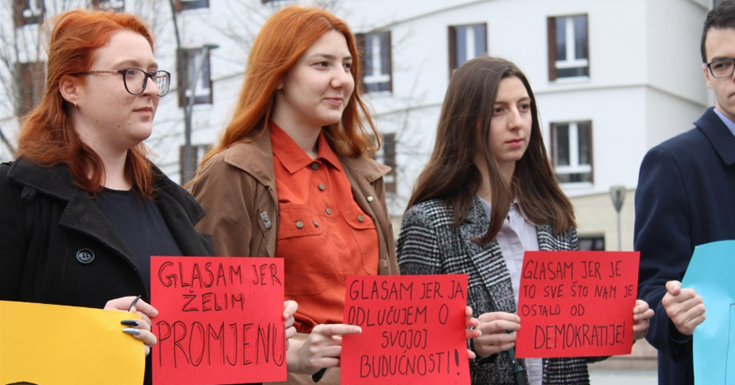 “I am glad I had the opportunity to show youth my city. We need to connect, get to know our country and send the message that all cultural and historical buildings are our joint wealth” (male, 19-24 years)

BHRI worked with 445 youth from different backgrounds to study, map and preserve historical monuments, ancient necropolis, medieval fortresses, and other heritage sites across the country. Youth have also involved citizens in the preservation of cultural heritage by organizing initiatives to clean up and mark the path to heritage sites. To educate citizens on their common heritage, youth have written a multitude of unifying stories about history and culture and undertaken several street actions, including medieval reenactments. The aim of these activities is to celebrate the country’s shared history and heritage and counter manipulation of historical imagery.
To promote interreligious tolerance, BHRI partnered with academics and museums to develop an online platform showing the evolution and historical development of the four main religions in BiH. Presentations to promote the platform reached more than 31,000 viewers and sparked dialogue on how these religions came to exist and thrive alongside each other throughout BiH’s history. BHRI also organized various study trips to Orthodox, Catholic, Muslim and Jewish religious sites and held discussions with religious leaders on how to overcome hatred and divisions. To this end, BHRI partnered with the interreligious community of BiH to monitor and condemn attacks on religious sites. BHRI also worked with youth on highlighting significant stories and monuments from their communities, in celebration of the country’s diversity.

BHRI’s veteran dialogues have also proven to generate empathy. BHRI has provided training to veterans from the three armies that fought during the war in the 1990s, which enabled them to engage in constructive dialogue with youth. A total of 60 dialogues were held with 544 youth – including 32 young politicians – and 200 women. In addition to creating more positive perceptions towards others, this activity touched on the issue of transgenerational war trauma that affects many of BiH’s youth. A more thorough methodology to address transgenerational trauma was also developed with BHRI’s support. Training and mentorship on the methodology was provided to 180 psychotherapists and other practitioners.
The issue of identity has also been addressed through several cultural activities. This includes BHRI’s support for writing and performing the multiple award-winning play “Identitluk” and the widely distributed Krajiška sofra cookbook, which celebrated the Krajina region’s rich culinary culture. Furthermore, BHRI has organized street arts festivals, theatre performances, music schools, and cultural festivals during which youth were provided with creative opportunities to challenge division. The latter includes two TEDx events in Zenica and Sarajevo during which inspirational speakers shared their experiences and understanding of the concepts of connectivity, courage, purpose, and possibility.

“Finally youth have the opportunity to talk in this country. It is important for youth who are growing up to have the space to share openly positive and negative opinions of what surrounds them. Bosnia lacks neutral spaces where young people can make their voices heard – which is what we strive to do here in this show”  (female, 15-18 years)
To strengthen positive and credible voices that challenge divisive narratives prevailent in mainstream media, BHRI has partnered with more than 20 local community media platforms across the country with the aim to create content that is relevant and appealing to youth and their local communities. BHRI has engaged its local media partners to implement the “school of journalism”, training a new generation of 350 community journalists. Through extensive mentorship as well as study visits to various communities, these youth produced and published over 900 youth-focused radio shows, youth tv shows, video stories, written articles and podcasts. The latter helped create an active podcast scene in BiH, connecting youth throughout the country with this relatively new type of content. Media content often features other BHRI activities, further amplyfing positive and unifying voices and ideas. Many BHRI youth participants continue to be profesionally engaged in journalism either through their studies or employment with local media partners.
BHRI also supports the creation and implementation of various national-level campaigns that challenge extremism, counter hate speech, promote political accountability, and amplify positive stories and narratives. On average, these campaigns produce a total of 850 social media and web posts per month with a reach of 3.5 million and engagement of 100,000, demonstrating that positive youth-led media content resonates both with youth and the wider public. 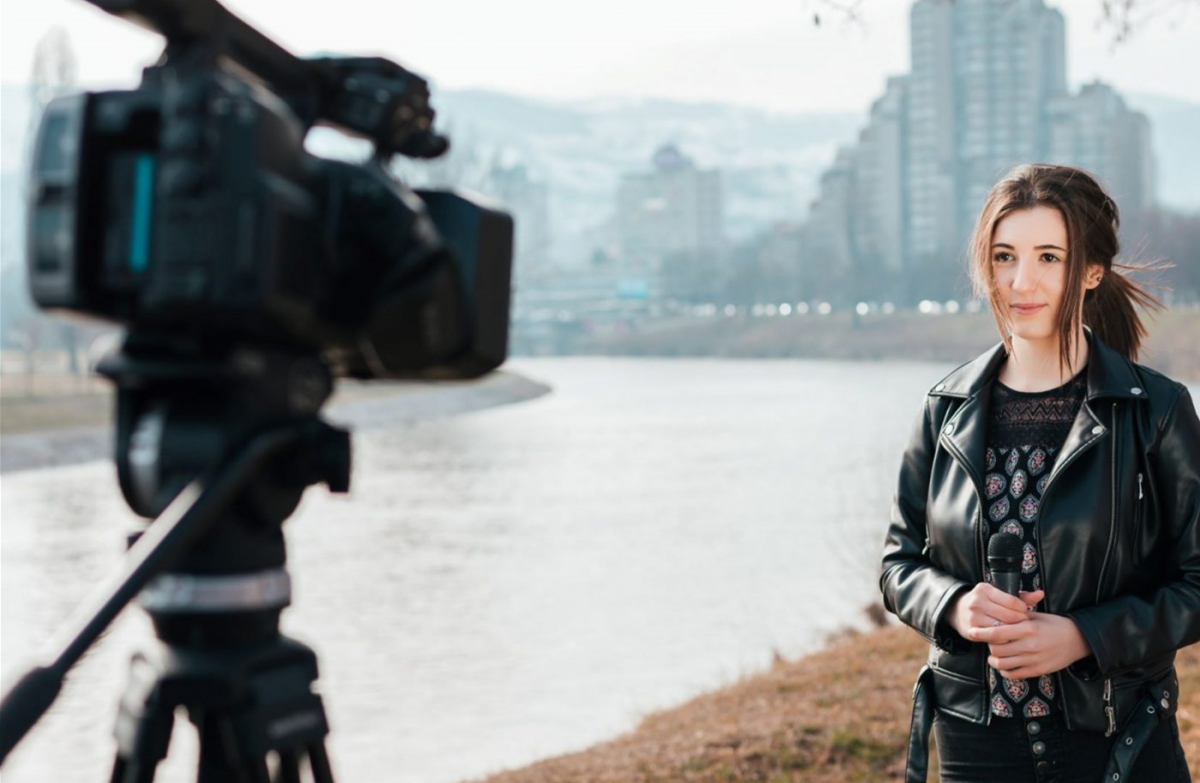 Turn Up the Volume! Documentary: Media